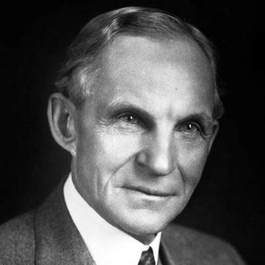 By: Qiming (Kevin) Wang - Economic-
Published: December,19th 2012
California - Henry Ford is perhaps one of the most important business men in the American history. Ford’s idea of production, the Assembly Line, totally changed the way of American industry production. Not just increasing the speed of production, it also made the automobile became a people product; most of the Americans were able to afford to buy a car. The assembly line enables automobile production workshop to step onto the factory age, and thus brought about a revolution in modern industry and commerce.

In addition to managing the enterprise, Henry Ford also spent lot of time thinking about the issues of political economy. As an idealist, he dreams of purged "hard labor from the labor, have elaborated on the nature of the democratic system, wages and benefits, philanthropy, the relationship between machines and people.

In 1914, Ford changed the minimum wage of Ford Worker from standard 9hours/2.34 Dollar to 8hours/5 Dollar. Ford believes that only the working class gets wealthy, the spending power will stimulate the economy.

Fordism is named after Henry Ford, it is a ideology that Capitalist industrial production should be escalated into mass production stages. The society has a production capacity of products to provide consumers with a great deal of material. This aspect of creating the material conditions for mass consumption, on the other hand, requires a large number of consumer supports. Mass consumption trapped the mass production needs of society which created a need for more materials. This desire to collect more materials escalated modern Fordism.


By: Jose Franco  -Intellectual-
Published: December, 19th 2012
California-Henry ford has largely been considered one of the greatest business minds in North America, his ideas have largely transformed what is now Modern America. The automobile is often considered to be one of the MOST important inventions of the 20th century and with good reason.  Only a few make it far in the business world and Henry Ford did indeed make it far. His idea began with the thought of a “Horseless Carriage” and one that could be mass produced for the average American.

This idea flourished and began one of the first (and most influential) automobile companies of the time, Ford motors.  People often get the idea that Henry Ford is credited for the invention of the automobile however, this is not the case. Ford simply invented a way for the automobile to be mass produced at inexpensive prices while paying high wages to employees, thus began the brilliant idea of “Fordism”. As quoted by a German who saw the impact that Ford motors had on American society.

“Automobiles have so completely changed the American's mode of life that today one can hardly imagine being without a car. It is difficult to remember what life was like before Mr. Ford began preaching his doctrine of salvation”.(German, 1942?) This just goes to show that Henry Ford’s ideology was very prevalent throughout the world. As quoted by Henry Ford himself “ Everything is possible…” “Faith is the substance of things hoped for, the evidence of things not seen.” (Ford,1922) Ford was right.