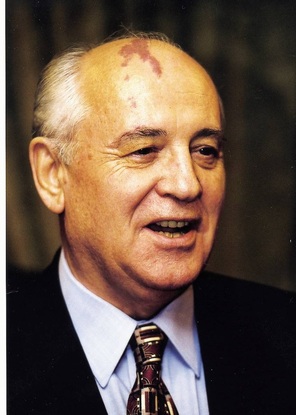 CALIFORNIA -For decades, the United States and the Soviet Union had been competing with each other over who could gather the largest, most lethal cache of nuclear weapons. As the United States was developing the new Space program, Gorbachev realized that the Soviet Union's economy was seriously suffering from the excessive spending on nuclear weapons. To end the arms race, Gorbachev met several times with U.S. President Ronald Reagan.

At first, the meetings were falling to a halt because trust between the two countries had been missing since the end of World War II. Eventually, however, Gorbachev and Reagan were able to work out a deal where not only would their countries stop making new nuclear weapons, but they would actually eliminate many that they had accumulated.

On March 11, 1985, Gorbachev became the Secretary of the Central Committee of the Communist Party of the Soviet Union. Strongly believing that the Soviet Union needed massive liberalization, Gorbachev immediately began putting in some social reforms which began to help shape what is now modern Russia.

He shocked many Soviet citizens when he announced the ability for citizens to freely voice their opinions (glasnost) and the need to entirely restructure the Soviet Union's economy (perestroika). Gorbachev also opened the door to allow Soviet citizens to travel, cracked down on alcohol abuse, and pushed for the use of computers and technology. He also released many political prisoners who were imprisoned for various harmless deeds and were simply caught in the wrong place at the wrong time.


California-Mikhail Gorbachev was the last General Secretary of the Soviet Union. He brought about massive economic, social, and political changes and helped bring an end to both the Soviet Union and the Cold War. He was Also Known As: Gorby, Mikhail Sergeevich Gorbachev Mikhail Gorbachev was born in the small village of Privolnoye (in the Stavropol Territory) to Sergei and Maria Panteleyvna Gorbachev. His parents and his grandparents had all been peasant farmers before Stalin's collectivization program. With all farms owned by the government, Gorbachev's father went to work as a driver of a combine-harvester. Gorbachev was ten years old when the Nazis invaded the Soviet Union in 1941. His father was drafted into the Soviet military and Gorbachev spent four years living in a war-torn country. (Gorbachev's father survived the war.) Gorbachev was an excellent student in school and worked hard helping his father with the combine after school and during the summers. At age 14, Gorbachev joined the Komsomol (the Communist League of Youth) and became an active member. Rather than attend a local university, Gorbachev applied to the prestigious Moscow State University and was accepted. In 1950, Gorbachev traveled to Moscow to study law. It was at college where Gorbachev perfected his speaking and debating skills, which became a major asset to his political career. While at college, Gorbachev became a full member of the Communist Party in 1952. Also at college, Gorbachev met and fell in love with Raisa Titorenko, who was another student at the university. In 1953, the two married and in 1957 their only child was born, a daughter named Irina. After Gorbachev graduated, he and Raisa moved back to the Stavropol Territory where Gorbachev got a job with the Komsomol in 1955.In Stavropol, Gorbachev quickly rose up in the ranks of the Komsomol and then obtained a position in the Communist Party. Gorbachev received promotion after promotion until in 1970 he reached the highest position in the territory, first secretary.